Suppose you are involved in a Cordys project with a good amount of detailed business logic to be developed in WS-AppServer, UI development, and data storage in some RDBMS and/or External Information System. You will need to come up with the database model (relational modeling), the domain model (OO modeling), UI’s, etc, typically resulting in 3 main categories of WS-AppServer classes. Let’s take a next perspective, and depict a layered organization of these classes as per class instances. At the same time, lets include quite a number of possible combinations on how the data for a certain class instance is collected with help of other classes or RDBMS/EIS. 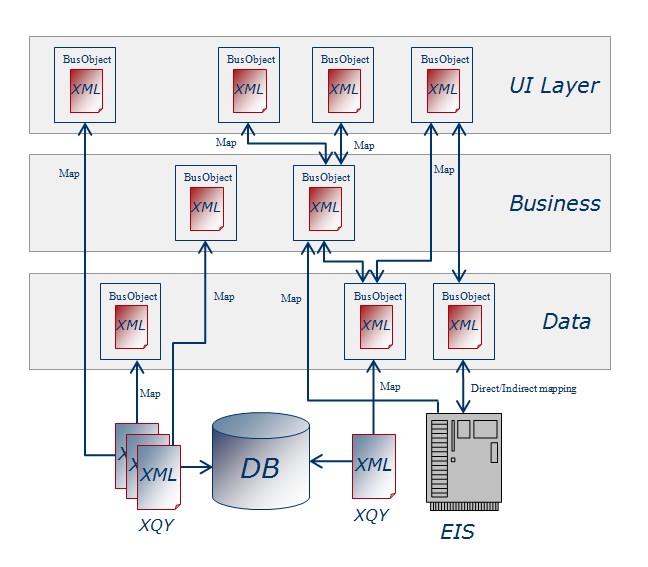 Not every project will need this much layers and combination of classes, however the above picture will illustrate you the subject of this blog post. It gives a runtime view; the design view with inheritance, association and composition is quite a different view, and not relevant here.

Notice a BusObject in the Business layer or UI layer possibly can be directly derived from the data in the database in case the structure happens to be 1 to 1.

As the Cordys platform is very much XML-based, this approach is also visible in WS-AppServer, where the object data inside the BusObject is represented as an XML document. Apart from the fact this integrates well into the Cordys ESB, it also gives advantages in the subject of BusObject mapping, as mapping on the XML layer handles more smoothly as compared to mapping  with help of native object properties.

Mappings can be bi-directional: one direction to collect the data and the other direction to update the data. Next are scenario’s of BusObject mapping: 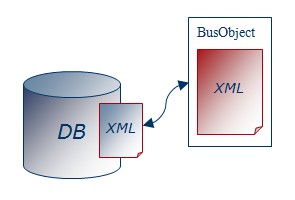 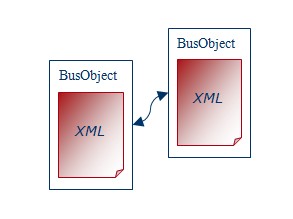 In the next 2 articles, we will subsequently dive into more details wrt these 2 scenario’s as to see what facilities WS-AppServer offer us to support these mappings.